For God and Country-Thomas Wright

Photographic works by Thomas Wright of Clinton, Indiana, will be featured throughout January in River City Art Association’s Artist of the Month gallery space in the Vigo County Public Library at Terre Haute.

“Life is too short, preserve its memories in a photo as tomorrow is never promised,” Wright said in his artist’s statement for the January display, which includes “Reflective Past” and “For God and Country,” and a couple of his award-winning pieces.

“Reflective Past” was taken in the Kennikuk Cove Co. Park in Danville, Ill., Wright said. It is from one of the old buildings in the Bunkerhill Historic Area. “To me it represents a bit of history and past into the ‘reflections’ of today.”

Wright’s image of “The Cross” near Interstate 70 in Effingham, Ill., “shows the importance of what America means to me.”

It took quite some time and several shots to get the right composition and the wave of the flag to show and represent his vision “For God and Country.”

Wright, born and raised in Terre Haute, had a fascination for photography and art at a young age. He was always drawing or taking photographs. After saving enough of his hard-earned money, he bought his first “real” camera from Galloway Photo Shops.

While attending Terre Haute South Vigo High School, he became the lead photographer for the yearbook. He also continued to sharpen his skills behind the camera and became a sales associate at Galloway Photo.

After working at Galloway Photo for awhile, Wright was promoted to run the black and white photo finishing and copy lab. He continued to work for Galloway Photo for close to six years before taking a job at Sony DADC, where he was a printer for almost 32 years.

Wright left factory work for health reasons and now concentrates on his photography, which he prints himself at home whether for an art exhibit or everyday use. He uses high quality professional papers and specializes in metallic and pearl-based papers which give his images a truly realistic look compared to a normal matte or semigloss print.

Wright has received several placement awards through the years entering his artwork in photography contests by TREES Inc. and by the Fine Arts Department at the Vigo County Fair. In 2018, joined River City Art Association and Wabash Valley Art Guild, and has entered many juried exhibitions and art shows promoted by the two groups. 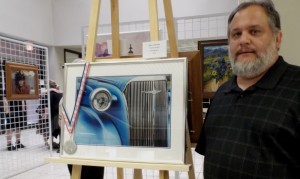 His “Vertical Limits,” received a First Place award in the photography category at the WVAG’s annual Spring Show in May at Clabber Girl in Terre Haute. Over Labor Day weekend, the same black and white landscape also received a Second Place award at the Little Italy Festival Art Show in Clinton.

Wright hopes to continue perfecting his photography and printing skills and be a part of the local art community. He will continue to exhibit his work to grow his recognition in the community as an artist.