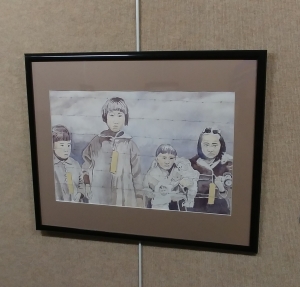 River City Art Association members Edith Acton, Jimmie Tabor and Sheila Ter Meer are participating in the Vigo County Public Library’s art exhibition in March in celebration of the Big Read: When the Emperor Was Divine by Julie Otsuka.

A coffee and conversation reception to meet all 8 entrants in the exhibition is scheduled 6 to 7 p.m. Monday, March 26 in the library conference room at Seventh and Poplar streets in Terre Haute.

Prizes will be awarded to the Best of Show, chosen by a special judge, and People’s Choice, as voted by library customers.

Our House with Rose Bush by Edith Acton

The VCPL received a National Endowment for the Arts grant to host a Big Read program during the months of February, March and April 2018, states the library’s call for artists. A featured program in the Big Read initiative is the 4th Annual Big Read Artist Exhibition. The artwork in this exhibition will be a reflection of Julie Otsuka’s When the Emperor Was Divine which tells the story of a Japanese American family’s experience in an internment camp during World War II.

The library challenged artists of all mediums to illustrate scenes from Otsuka’s powerful novel with prevalent themes of national identity, heritage, the American dream, racial prejudice, imprisonment and alienation.

Jimmie R. Tabor of Center Point, Indiana, entered a watercolor titled “Lost Identities.” “The Japanese Americans went to the camps willingly and were greatly confused,” Tabor said in his artist’s statement for the competition. “The children suffered a great trauma in their formative years.”

Edith Acton of Terre Haute designed a fused glass wall hanging titled “Our House with Rose Bush.” Edith said “The family’s house was in a neighborhood that was filled with colorful trees and was a reasonably nice area. The house was two stories with a porch and gravel path. The woman had planted a rose bush that was remembered when the family returned to the house. It had been stolen from the front of the house.” 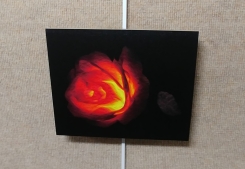 Sheila K. Ter Meer of Brazil, Indiana, created a photography-based digital art piece on fine art canvas mounted on bamboo panel titled “Somewhere … Blossoming Madly,” inspired by a line in the book: “we never stopped believing that somewhere out there, in some stranger’s backyard, our mother’s rose bush was blossoming madly…” The rosebush represents the ideal of freedom. In the end, the children imagine the rosebush growing freely and without restraint. In the real world, the rosebush and freedom it represents are stolen from them. It becomes a metaphor for the U.S. stealing the freedom of Japanese Americans.