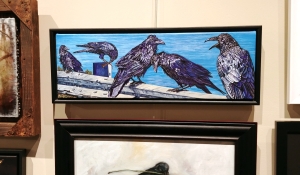 Ruckus On A Rail by J. Melanie Cloutier

“The crows seem to love downtown, and visitors to Crow Show 2018 will love viewing the renderings from artists across North America,” says Arts Illiana in a press release for the Terre Haute Tribune-Star.

“Ruckus On A Rail” by J. Melanie Cloutier of Terre Haute is an acrylic on canvas with a float frame presentation.

“Flocking Crows” by Todd Stokes of Terre Haute and Dennison, Ill., is a glass etching and wood sculpture.

“Approaching the Drop Zone” by Sheila K. Ter Meer of Brazil, Indiana, is a photography-based digital art abstraction on metal, with an acrylic float mount presentation.

A closing reception with awards ceremony is set for 6 to 9 p.m. Friday, April 20, in the gallery.

“Scher is a painter and experimental filmmaker. His work is in the permanent collection at museums, among them the Museum of Modern Art, and has been screened at film festivals around the world, including opening night at the New York Film Festival,” states the Arts Illiana press release. “He has also created work for The New York Times, The New Yorker Magazine, IFC, HBO, PBS and the Sundance Channel. He also has made music videos for Bob Dylan, Paul Simon and others.

“He most recently animated the story of a Holocaust survivor for an HBO original documentary, which had its premier at the Museum of Jewish Heritage in Manhattan along with an exhibit of the original artwork. He teaches at the School of Visual Arts and at N.Y.U. Tisch School of the Arts, and is a guest artist this semester at Parsons School of Design.”

For more details on Crow Show 2018 and other exhibitions, visit artsilliana.com.