A spring show by River City Art Association will be featured April 7-28 in The Gallery at Clabber Girl Museum, 900 Wabash Ave., in Terre Haute.

An opening reception to meet many of the artists is set for 6 to 8 p.m. April 7.

More than 25 works will showcase the diverse talents of the art group, including a 24- by 36-inch acrylic on Masonite by RCAA founding member Monty “Indiana” Jones of Terre Haute.

Jones said friend and photographer Brendan Kearns of Terre Haute provided the image for him to use as reference for his painting, thus the title “B.K.’s Doe.” 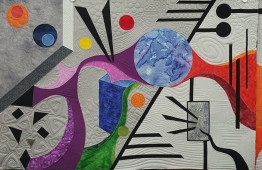 Symposium of Peace by Valerie Funk

Digital art on display will include “Bubbles,” one of many fractal flame images created by Spencer Young of Clinton using algorithm software.

RCAA members will participate in a second art event, the “Wabashiki Artisan Faire,” set for 9 a.m. to 3 p.m. April 22 at the Dewey Point trailhead to the Wabashiki Trail at Wabashiki State Fish & Wildlife Area in West Terre Haute.

Hosted by Wabash Valley Art Guild, the faire will feature art displays and demonstrations by members of both art groups under a tent at the Bill Wolfe Art Studio at 110 E. National Ave., next to the trailhead parking lot.

RCAA membership is open to any Indiana or Illinois artist age 18 and older.

Regularly scheduled meetings will resume on the second Tuesday of the month in the Vigo County Public Library in May.