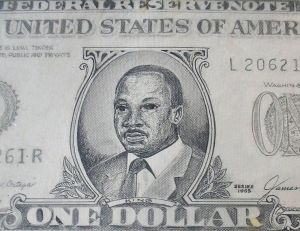 River City Art Association and the Vigo County Public Library will feature art by Don Turner throughout February in the library at Seventh and Poplar streets.

The Artist of the Month exhibit is primarily in honor of Dr. Martin Luther King Jr. in observance of Black History Month.

Turner was born and raised in Terre Haute. He has shown artistic skills from his days at McClean Junior and Garfield High schools. During those years he was taught the basic fundamentals of art by Frida Terhorst and Jessie Martin.

After high school he attended Butler University and the Herron School of Art in Indianapolis where he studied with renowned Indiana artist Harry Davis.

Hardships forced a move back to his hometown of Terre Haute. He enrolled at Indiana State University where he studied art with Charles Reddington, Whitney Engeran Jr., Monty Montgomery and Dick Hay.

He earned several degrees in art education, a master of arts and a master of science degrees.

Turner is well known in Vigo County after teaching art in the public schools, teaching in the college and working in the community. After many years of teaching art, he retired in 2008 and started his own art business as an illustrator.

Turner’s company, Turner Graphique Designs, has done work for several well known companies in Terre Haute and the surrounding area including Clabber Girl, Williams/Randall Marketing and Communications, the Kiwanis Club of Terre Haute and many others.

In addition to the art business Turner is active in the Vigo County Retired Teacher’s Association, Kiwanis Club of Terre Haute and River City Art Association.

Turner is a past president and past vice president of RCAA. The art group welcomes new members; the next meeting is scheduled 6 p.m. March 8 in the library.