And the People’s Choice award goes to … Deanna Swearingen

The exhibition was a reflection of Bates’ work as she teaches Shakespeare to maximum-security prisoners.

In her book, Bates explains that by engaging with prisoners and incorporating Shakespeare she is “introducing critical thinking to people who have never had that opportunity.”

In keeping with that theme for the exhibition, the library asked artists “In what other interesting ways can we connect with Shakespeare?”

Artists of all mediums were encouraged to create entries inspired by the theme “An Unconventional Shakespeare,” and based on any work by William Shakespeare.

Swearingen’s photography entry was based on the line from Macbeth, “Let every man be master of his time.” She set the stage with a prisoner reading “Shakespeare Saved My Life.” 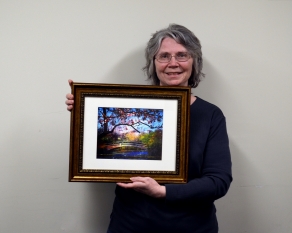 In “A Midsummer Night’s Dream,” Shakespeare wrote of a forest enchanted specifically by the presence of Oberon and Titania, the fairy king and queen. Like many forests in Shakespeare’s works, it becomes a place of metamorphosis and resolution. People come out of the forest changed for the better. 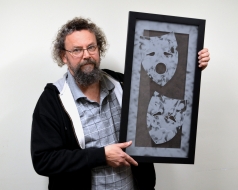 Fear and Anxiety by Todd Stokes

RCAA artists Todd Stokes and Don Turner, both of Terre Haute, also had entries in the Community Read exhibition.

Stokes created an etched glass piece titled Fear and Anxiety. Always a representation of the performing arts, the comedy and tragedy masks have always interested me, Stokes said. These atypical renderings show fear and anxiety.

Turner’s charcoal and pastel drawing, titled Ringtime, and based on Shakespeare’s poem, “It Was a Lover and His Lass,” and the song “As You Like it,” (Act V, Scene II), features a woodcutter and a milkmaid on a spring day just before their marriage.