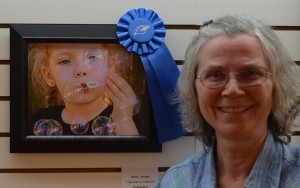 Photographic works by Sheila Ter Meer of Clay County will be featured in a solo exhibit throughout August in Covered Bridge Art Association’s Gallery at Rockville.

The Brazil native is a member of River City Art Association and Arts Illiana in Terre Haute, and an associate member of Covered Bridge Art Association. She was awarded the opportunity to showcase her photography in the Gallery as Best of Show winner in the July 2014 CBAA Associate Members Show.

Ter Meer is a self-taught photographer; some of her news and feature photos have been published in the Terre Haute Tribune-Star where she has worked in the features/community news department since 1981.

Until January 2013, photography was just a hobby she shared only with family and friends and in Open Class competitions at the Clay County 4-H Fair.

In addition to riverscapes, Ter Meer’s favorite subjects run the gamut: family and pets, old barns and pastoral scenes, wildlife, plant life, sunrises and sunsets, cityscapes, seascapes, statues, landmarks, tourist attractions, and anything that satisfies her penchant for whimsies – anything playful or fanciful, as an artistic creation.

“My primary focus is nature and life experiences; I approach all aspects of our daily existence – natural and manmade – with curiosity, excitement and amazement as that of a wide-eyed child experiencing the world around them for the very first time,” she said. 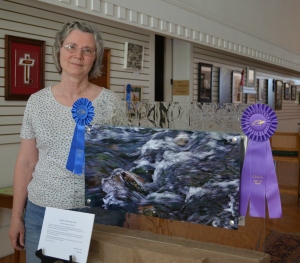 Ter Meer likes to “think outside the frame.” In addition to traditional lustre and glossy photo paper, she presents more contemporary images on metallic and watercolor giclee paper, canvas, wood, aluminum and acrylic. Her first three-dimensional piece was juried into an exhibition in Halcyon Contemporary Art Gallery in Terre Haute before winning Best of Show at the 2014 CBAA Associate Members Show.

Ter Meer also loves to “break all the rules” and create abstract art from traditional images. In May of this year, her photo art on aluminum won the inaugural Roger King Memorial Award and a second place at the Wabash Valley Art Guild Spring Juried Exhibition. 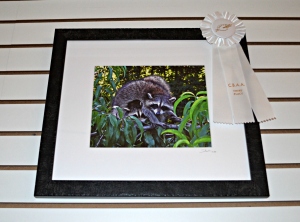 Ter Meer’s August exhibit in the Covered Bridge Art Gallery will include her Blue Ribbon entry in this year’s Associate Members Show, her Third Place photo in last year’s show, and a collection recently featured in the Arts Illiana Outreach Gallery in Terre Haute Savings Bank.

Her 3D Best of Show entry is not part of the exhibit; she has entered it in the Seventh Annual River City Art Association Juried Exhibition scheduled Aug. 7-19 in First Financial Bank in downtown Terre Haute.

Ter Meer’s abstract photography will be featured in RCAA’s Fall Exhibition in Moench Hall at Rose-Hulman Institute of Technology.

Most of Ter Meer’s photos and abstract creations are featured on her blog, Sheila T Illustrated, at sheilatphotography.wordpress.com.