River City Art Association’s “Indiana Heritage Art Exhibition” will be showcased July 1-31 in the Vigo County Public Library at Seventh and Poplar streets.
At least 21 RCAA members will exhibit artwork celebrating Terre Haute and Indiana’s bicentennial year, as well as Indiana State Parks centennial year.
The library will host an opening reception with some of the artists from 5 to 6 p.m. Friday, July 1, in the lobby as part of Downtown Terre Haute’s First Friday events.

endorsed by the Indiana Bicentennial Commission. It is informative and educational with a focus on the state river, song, tree, bird and notable people, places and events in Terre Haute and Indiana’s history. It also highlights Indiana’s four seasons, reflects the importance of preserving Indiana’s past and its natural resources for the future, and impresses upon the viewers history’s lasting influence in the visual arts. 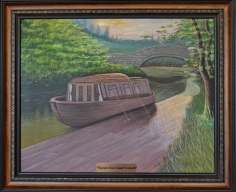 Several of the works were created specifically for the project, including historical depictions of Terre Haute’s heritage by RCAA founding member Monty “Indiana” Jones, in an acrylic painting titled “Wabash Erie Canal Towpath,” and by Don Turner, a watercolor titled “Allen Chapel Underground.”

Other participating artists and their works include Della Bender, an oil painting of a native Miami Indian site in Clay County; Mike Bender, a pen and ink drawing of Fairbanks Park in Terre Haute “on the banks of the Wabash,” Indiana’s state river; RCAA founding member Ruthann Brady, an encaustic collage; Michael Elmore, a painting of Abraham Lincoln’s Indiana boyhood home; Valerie Funk, a fabric and thread wall hanging of Indiana’s colorful foliage; Steve Harrold, an oil painting of an Indian, Indiana’s namesake; Janae Holland, a photograph of a cabin at Billie Creek Village in Parke County; Jan Skipo, a photograph of a rustic Indiana barn; Deanna Swearingen, a male cardinal, Indiana’s state bird; and Eugene Thomas, a painting of the original Bridgeton Bridge in Parke County, the “Covered Bridge Capital of the World.”

The End is Nothing The Road Is All, fabric and thread wall hanging by Valerie Funk

RCAA’s “Indiana Heritage Art Exhibition” debuted in May at the centennial celebration of the Terre Haute Masonic Temple. After the library event, the exhibition will be featured throughout September in The Art Gallery at Clabber Girl Museum in Hulman & Co., 900 Wabash Ave., Terre Haute.

RCAA meets at 6 p.m. on the second Tuesday of each month in the Vigo County Public Library. Membership is open to any artist in Indiana and Illinois.